A Presidential Fart Worth Talking About

Last week's news included a Presidential fart at the climate conference in Europe. And I am not using presidential as an adjective. Apparently, President Joe broke wind during a break in the talks. (This really happened)

And there was no leak … Okay, there was a leak, but not a news leak. He unloaded while he was talking to Camilla Parker Bowles, otherwise known as the Duchess of Cornwall. And we have it straight from the horse’s mouth, which in Camilla’s case is more literal than it should be, that old Joe released a fart described as “It was long and loud and impossible to ignore.” Reportedly, the fart was so prestigious that Camilla hasn’t stopped talking about it.

She talked about it so much, it is now known as “the fart heard round the world”. It is a major social faux pas to fart in the presence of royals. The Brits consider her a Duchess and a lady, and in the words of Helen Reddy, “That ain’t no way to treat a lady, no way …”. So far, the royal family has not raised a stink about it because although the fart was long and loud, it was not pungent.

In President Joe’s defense, he may just have been reminding the Duchess that we won the Revolutionary War and was displaying our country’s continuing dominance. Or maybe he was just showing respect by offering the royal a blast of his trumpet. And there is a chance that the whole incident was overblown because Camilla, a royal, has not been exposed to any farts because reportedly, the royal family is so pristine that they never fart. 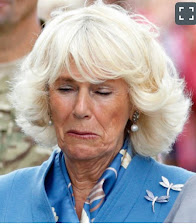 On the other hand, there are rumors that Joe’s Secret Service code name is “Fart Face”. And it seems that the agents at his rear, stand a full three feet further back, four if downwind, than they did with previous presidents.

Regardless, this is not a good look for our leader. You are at a world climate conference, and you decide to emit a greenhouse gas into the environment, the local environment. The people there are all concerned about cow farts, and you fart like a cow.

Furthermore, President Joe has worked to restrict gas production in this country, yet he has no problem cutting the cheese himself. Joe has closed some pipelines, but his pipeline remains fully functional, and active.

Some people have criticized President Joe for being unable to control inflation, the border, COVID, etc. And now we learn he can’t control his sphincter either.

President Joe’s biggest mistake was letting loose in front of a woman, a woman who just can’t deal with farts. If he had emitted when he was talking with a guy, any guy from any country, the universal guy response would have been to crack a goofy grin, and laugh extensively like Beavis and Butthead. Yes ladies, that is what we males do in that situation. We don’t go on talking about it so that it makes the news.

We Americans may be embarrassed about it, but we have no recourse. We elected an old man as president, and now we must endure old man problems, as unpleasant as they may be. Camilla is the Duchess of Cornwall and now she has been exposed to our version of the Great Cornholio.

But Joe, c’mon man! Next time you are with Camilla Parker Bowles -- Joey Park-Yer Bowels!