My alma mater, the University of Akron, made front-page news (yes, really) by purchasing four “nap-pods”. The nap-pods provide a calm, dark, relaxing environment so students can relieve stress by napping at three locations around campus. The nap-pods are a cross between a dental chair and a privacy dome, with soft music and soothing messages piped in to enhance the napping experience.

While millennials think this “so Gucci” and “lit”, my generation surprisingly has a different take. The comments on social media bemoaned that the soft kids of today even need a safe-space to take a nap. A few germaphobes also objected to the pods not being sanitary.

My complaint is the pods cost $13,000 each, which for you math-challenged millennials out there, is $52,000 total. When I posted this information on the discussion thread, several alums were concerned their donations to the university paid for the ridiculous contraptions. I quickly assured them this was not the case. “Excess Covid-relief funds paid for the pods. So, your donations were not wasted on this, just your tax dollars.”

Of course, I will bet you a year’s salary that eventually, two students will attempt to “rock the pod” so to speak. So, that’s going to be a problem regardless.

The “old-timers” pointed out in the thread that “in their day”, students would nap in the library and a place called Summit Lounge. I remember during my days there, students would curl up in the corners of the library using their book bag as a pillow or sleep face down in the carrels. I guess that’s where the rest of the students will continue to nap when all four sleep pods are occupied. 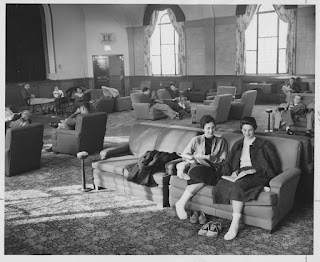 But alas, Summit Lounge is long gone. The large room was originally built in the 1950’s as part of a new addition to the existing student center. It was used as an auditorium and stage. When they built a new student center they connected it to the most recent addition and the room became  “Summit Lounge”. It contained one and two-person upholstered red chairs, as well as a few round tables for gathering or studying.

The lighting was dim, and students talked in hushed tones, so there were always students curling up in the more extended seats to take naps. Some couples even used the far corners of the room for “making out”, resulting in the place getting the nickname “Smut Lounge”. And I doubt if those chairs had been cleaned since the 1950’s, so I guess we didn’t care about the germs as much as people today. Well, we survived, so I guess the boomers are tougher in that regard, also.

So them sleep pods are one of those whiz-bang, doo-hickeys that the older generation just doesn’t understand. And paying $13,000 for a high-tech cot? It really doesn’t cost anything because it was government money that always appears magically out of the air.

But One More Thing About Summit Lounge

The offices for the Buchtelite (University of Akron student newspaper) were also in what was then the old part of the student center, connected to the east end of Summit Lounge. During the spring of 1977, I was News Editor and also wrote my Ake’s Pains humor column, so I spent most of my free time in the Buchtelite office. The nearest restroom and dining were in the new part of the student center, so I frequently had to cut through the center of Summit Lounge.

One day in mid-April, I was dashing through Summit Lounge to the student center when a co-ed seated at a table on the aisle motioned me over. I had seen her several times before. She worked on the yearbook staff, and that office was directly across the hall from the newspaper. I would visit the yearbook office occasionally because several attractive young women were on that staff. I was interested in all of them, except for the one now calling me over. “Definitely, not my type – no interest in her at all.”

What followed was one of the strangest conversations of my life. She invited me to sit down and said she thought we should be a couple and waited for my response. I had never even spoken to her before, and the request was outrageous, like something happening on the third-grade playground.

I’m sitting down, so I can’t run away as I would have done on the schoolyard. But three things influenced my response:

1.    I am not rude, and it would have been rude to reject the offer out of hand.

2.    I am ridiculous, and I like ridiculous. So, I was entertained and amused by the offer.

3.    Her timing was impeccable. I was so busy that quarter, my social life was nonexistent. I had no reason or excuse for declining the offer. Except for she is “not my type,” and I had no interest at all.

“Sure, I’ll be your boyfriend,” I replied. But with that, I jumped out of the chair and bolted for the door. On my return, I didn’t cut through Summit Lounge, taking the longer route by going outside and entering from the back door.

I had not been serious with my reply, but technically I had just agreed to enter a relationship with someone I had no interest in. And the most outrageous part is I didn’t even know her name. Now I will say, I was at least amused and flattered by her request. I was failing miserably at getting the attention of all of the co-eds that I was interested in, and here this one wants to date me, and she doesn’t even know me.

There was no contact between us for the next week. I skedaddled before phone numbers were exchanged. I wasn’t necessarily avoiding her, but I thought this was all a joke and would disappear quickly. But as I cut through Summit Lounge a week later, there she was, same table, same beckoning, same chair for me.

And she started talking as if we were an actual couple. I said very little in my highly anxious state. She suggested we exchange numbers, which I didn’t want to do since I couldn’t really call her if I wanted to because I still didn’t know her name. But when she reached into her bag to find her pen, I could lean over and read her name and address on the class scheduling form on the table. After we traded phone numbers, I dashed for the door again. Well, I now have a girlfriend, and I know her name! Sounds like a great title for a country music song.

I can’t remember much about what happened right after that, but soon she suggested we go on a date. This was a reasonable request since a couple dating, should indeed go on dates. But I’m not going to plan something because I’m still not committed to anything. So, of course, she tells me we are going to a high-school musical because her brother has a leading role in it.

Now, if you would have told me I would be attending a high-school musical with this young woman a few weeks prior, it would have been laughable. But there I was, out on a date, dining with her before going to her old high school.

The musical is “Guys and Dolls” and I of course am bored out of my mind. The room is dark and I’m not paying much attention to what’s happening. But I’m thinking I’m getting through this evening unscathed. The musical is almost over when they hit the 27th song out of 30. It is titled “Marry the Man Today”. During this song, she grabs and squeezes my arm. I look at her, and it is one of those desirous stares a woman gives when she really wants something. Suddenly, the fun and games were over. This just got real – much too real. Got too real – really fast.

Oh, no. Oh, HECK no. I didn’t sign up for any of this nonsense. Implying you want to marry me on the first date when we basically just met. Way, way, too much. This has got to end now. Right now.

So, how did this ridiculous, bizarre relationship end? Well, life and love are funny things, aren’t they? Sometimes both spin out of your control, and you just have to go where they lead, no matter if you have other plans. Oh yeah, the woman’s name happens to be Dawn, and that relationship is on year 44. I tried to break up with her once, but she wouldn’t let me. And I have very fond memories of Summit Lounge.