Everyone is heartbroken over the recent divorce of Gisele Bundchen and Tom Brady. This was the grown-up equivalent of the high school quarterback paired with the homecoming queen, except unlike then, where that coupling was doomed to fail, they actually made it work for 13 years, producing two offspring.

Don – The Relationship Expert – Explains It All

There has been much speculation about why the marriage ended. Of course, being an expert in male-female relationships, I know the real reason for the break-up.

It was all a result of Tom losing at the game of: How Mad Will She Get? All husbands play this game, some more than others. Frequently a husband will want to do something, buy something, go somewhere, etc., that his wife disapproves of. Then the husband has to decide if he is going to do the action anyway, based on how fizzed his wife will get.

Now at this point, you women out there will think this is the dumbest thing ever – “Why would anyone ever play a game that leads to your wife getting upset? That is so stupid!” Well, remember, ladies, we are men – with man-brains – and we actually enjoy doing foolish stuff. And besides that, if we didn’t do anything our wives disapproved of, we would have no fun at all.

So, when we are told we can’t do something, we calculate how much heat we will get if we disregard our wives' wishes and do it anyway. In the advanced version of the game, the husband tries to figure out what action he might take to mollify his wife’s resultant anger. Maybe a nice dinner, some flowers, or some extended time “between the sheets”- which is usually just wishful thinking. Yes, the game, and the big question is: How Mad Will She Get?

Here is an example: A husband is excited because a college friend is visiting from out of town, and two other local college chums want him to play golf on Sunday afternoon. But then his wife reminds him there is a get-together with her side of the family that same day. The guy would so much like to play golf with his buddies rather than waste a perfect golfing afternoon spending time with his wife’s crazy aunt Zelda cackling on about her inflamed bunions. Of course, his wife fully expects him to attend the party because it is the polite, respectable, and civilized thing to do.

But now the husband must predict his wife’s anger level if he golfs with the guys. Of course, being the conniving male he is, he will ALWAYS underestimate her level of anger and overestimate his ability to balance it out. He may even think she will “forget it even happened” at some point. – Bawaaah, bawaaaaaaaaaaaah, ba-double-waaaaaaaaaa!

So, the guy will make the mental calculation and go golfing. What he doesn’t, and never understands, is this is much more than just a family event to his wife. There are all sorts of emotions, feelings, bonding, and female stuff that go into this that will be greatly diminished if he’s not there. Also, everyone at the party will end up hating him. The women there will resent the implication that he would rather golf than be with them – which is actually true. And the men will hate him more because he is out having fun while they are stuck at the boring get-together listening to stories about bunions and other family dribble. The women are also upset because they empathize with the wife’s feeling of abandonment. Ahh, so sad.

Now, if the husband didn’t golf, he would be forced to tell his friends that his wife wouldn’t let him go. Of course, he has a good reason. But he would still wonder if they would laugh at him, or even call him a pu$$y on the golf course. Decline enough of these invitations, and you could lose your “man-card” and maybe even stop getting invited to these “guy” events. So no, ladies, declining the invitation is not an “easy choice”. 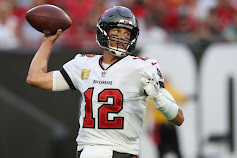 Brady Loses At This Game

Apparently, Gisele had been hounding Brady for years to retire and spend more time with the family. She was delighted when Brady retired at the end of last season, but was enraged when he unretired just a few weeks later.

It appears Brady severely underestimated Gisele’s level of anger, and lost at the game of: How Mad Will She Get? I mean, yes, your wife will get mad, but you never want to make her mad enough to leave you.

Don, are you telling me that a guy with seven Super Bowl rings, the greatest quarterback ever, someone that can figure out how to defeat the Tampa 2 defensive scheme with an extra safety in the slot, just lost the How Mad Will She Get? game because he can’t figure out his wife? Yeah, because it doesn’t matter how experienced, intelligent and observant you are, you still can’t figure out your wife.

The other miscalculation Brady made was not accepting the fact that his skills had diminished. No true guy will admit they that can’t perform like they used to. They will believe in their man-brains that they are still 25 years-old but fail miserably and embarrassingly. It’s never pretty, always disappointing, and keeps orthopedic clinics in business. Brady is 45 years old and well past his prime. Gisele was correct, he should have stayed retired.

If you doubt this, Brady is rated the 16th best quarterback in the league, which is pathetic compared to his glory years. Of course, there is another important factor besides just age affecting things here. You see, Brady was married to Gisele for 13 years, and was accustomed to getting some, uh smokin’ hot … ah, some wet, @$$ … uh … some wang, dang, sweet, uh. Let’s just say he was used to getting some “Gisele”. Talk about having deflated balls! They were deflated and blue at the same time! When are used to getting some “Gisele” and then suddenly you are not getting any “Gisele” you ain’t going to be able to throw straight. It’s a wonder he can even throw at all! Too old and not getting any “Gisele”; Brady was doomed before he started his comeback.

Don Simply Explains It All

So there you have it, people. The divorce resulted from losing the: How Mad Will She Get? Game, which all husbands play. And Brady’s disappointing performance on the field is being caused by his age and having to play with severely deflated balls.