I Don’t Get A Kick Out Of Soccer

Soccer is my least favorite of the major sports.  I never played it during my athletic days and I’m not sure it even existed when I was in high school.  I don’t think you have to be very skilled to play it.  I mean all you do is just run around and kick a ball.  You learn to kick when you are still in the womb and you’re running by age three, so how hard can it be?

I can’t get serious about a sport where guys run around in shorts outdoors.  In addition, I am uncomfortable with men giving cards to other men during the game. Come on; is this a party or a real sport?

I know soccer is currently gaining popularity in this country, but then so is socialism.  I have heard that many mothers have started playing the game.  I assume that these “soccer moms” are attempting to lose their baby fat and fit back into their “misses” jeans and of course I support that effort.

I know that soccer is very popular in Europe, but then so is socialism (coincidence?).  They take their soccer very serious over there.  Often there are riots, car burnings and even deaths after a team loses an important match.

I find this very strange, because soccer is extremely boring to watch.  It is not even as exciting as baseball, where between all the spitting, scratching and stepping out of the batter’s box, the ball is actually only in play for a few minutes in an average game.

But soccer is so boring that if you gave me the choice between watching a soccer match and a NASCAR race, I’ll go redneck on ya.  I am not a NASCAR fan because it consists of going around in circles at high speed, but never really getting anywhere, which also too closely describes my life.  In addition, I can’t get into a “sport” where the most exciting parts are when something goes wrong and people almost die.  Sorry, that happens all the time at work, I don’t need to see any more of that on the weekend. 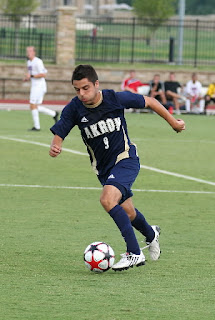 Because of all these things, I never thought that I would ever watch an entire soccer match.  But in 2010 the University of Akron, my alma mater, played for the NCAA Division I Championship.   I could only watch parts of the earlier games in the tournament before falling into a deep sleep, but I got my nachos and birch beer and planted myself in front of my big screen for the big game.

And I discovered something very strange about watching an entire soccer game.  It is different than watching any other sport.  It is very difficult to score a goal in soccer.  It can take much time and effort to move the ball the length of the field before there is even a chance to score.  A team can go an excruciating long time before even attempting a shot.

This wanting your team to score but having to wait so long to do so, builds up a tension that is comparable to only one other feeling known to man.  And I do mean man, not human kind.  Men reading this know what I am talking about and the women reading this are smart enough to figure it out.

When guys need to score and are prohibited from doing so, bad things happen.  This explains why buildings get burned, cars get torched and people die, when fans of losing soccer teams express their pent up frustration.

This is not a unique concept.  Psychologists have done many studies on how the performance of sport teams affects the sexual performance of their male fans.  I remember reading about a study that found that fans of winning NFL teams had higher testosterone levels and had more sex than the fans of losing teams.   This explains why the population of Cleveland, Ohio continues to plummet.  Fans of the Cleveland Browns have not had any sex in years.

Currently the University of Akron soccer team is ranked number one in the nation and is expected to make a deep run in the NCAA tournament that is currently underway.  Time to stock up on nachos, birch beer and … ice!

Update: My University of Akron Zips were defeated and knocked out of tournament on November 25, so I set my neighbor's car on fire.
Posted by Don Ake at 6:07 PM