A Tribute To Tim Richardson

My brother-in-law Tim Richardson (age 47) passed away very unexpectedly on April 2.  The following are the series of my Facebook postings surrounding the event.  I know they don’t belong on a humor blog, but I need to record this for posterity and this is the only place I have to post it.  You may consider this Ake’s pain, so in an odd way it almost fits.


The News (April 2, 2013)
"The real troubles in your life are apt to be things that never crossed your worried mind, the kind that blind side you at 4 PM on some idle Tuesday." Today (a Tuesday) at around 3 p.m. my wife called to tell me that her youngest brother, Tim Richardson, had unexpectedly passed away. It would be difficult to know a finer person or to have a better brother-in-law. Heavy grieving.
The Pain
I apologize to my family for not being able to offer any comments of support or condolences at this time. I hurt, I just hurt, so incredibly bad .....
The Tributes﻿
#1 - Tribute to my brother-in-law Tim Richardson who passed away Tuesday: Last year Tim and I served as pallbearers at his father’s military funeral. There are strict rules on handling the casket and they asked for two volunteers from the pallbearers to assist with the closing of the casket. I immediately volunteered. I really did not want anything to do with closing anyone’s casket, but I didn’t want Tim to have to go through that with his own father. I was relieved when someone behind me immediately raised their hand also. That was until I turned around and saw the other volunteer was Tim. I pulled him aside and strongly protested. “You do not have to do this. You should not have to do this”, I said sternly. “It’s okay, I want to do this”, he said calmly. That ended the argument because I was totally speechless. He wanted to do that? Who wants to do that? I don’t want to do that for a stranger, let alone a parent. Yet Tim saw that as a responsibility and actually wanted to fulfill it.


#2 - A Tribute to my brother-in-law Tim Richardson who passed away April 2: In February 2012 the family was jammed into a crowded hospital waiting room because my father-in-law was critically ill. A person carrying food to another family spilled half a cup of ice on the floor. Most of the ice fell harmlessly on the carpet, but a couple pieces fell on the tile walkway where we were gathered, thereby creating a safety hazard. I was seated against the wall and the ice was close to where Tim was standing.
I pointed to the ice and told Tim to kick the cubes back onto the carpet. Instead of doing that, Tim picked up the ice on the tile and then proceeded to pick up every other piece of ice on the carpet and throw them in the trash. Once again I was just amazed by this act. Unbelievably, the other family was offended that he had cleaned up their mess!
Some people never seem to do what is required in life. I guess I try to get by doing just what is required. Tim was exceptional because he tried to do more than what was required, even when under stress in a hospital waiting room.


#3 – A tribute to Tim Richardson, my brother-in-law, who passed away April 2: Two years ago I adopted a new philosophy: I want to live my life in such a way that people cry at my funeral. Easy to say, hard to do. Some days I do accomplish this, most days I fail.
I never thought about what the scene might look like if a person was actually able to live a life that cherished. But now I know, because last Friday night I sat by myself in the corner of a funeral home and watched intently as the line of mourners moved past the casket. I have never been in the presence of so much sorrow ever before. And there is a difference between sorrow and sadness. Sadness is a surface emotion. Sadness is expressed because the person is deceased. Sorrow is a deep emotion and expressed because the person is no longer here. We are now missing something beloved, someone that we will never have again in this realm.
And sitting in the midst of this sorrow, I began to absorb it, to breathe it in. And the human body can only hold so much sorrow at one time, so at some point I had to escape the melancholy and retreat outside. And there at the edge of the parking lot, the sorrow absorbed in the previous 80 minutes poured out of me. This was a life well lived, very well lived, indeed.
#4 (and final) Tribute to my friend (and brother-in-law) Tim Richardson who passed away April 2: On February 11, my wife’s family met for dinner at a Fairlawn restaurant to commemorate some occasion that I can’t even recall. I do remember that I wasn’t really looking forward to the event since it was on a Monday night and we would have to rush to get there and then get home late.
At the table, Tim was seated to my immediate right. Looking back, this wasn’t unusual. At most family events, Tim and I usually hung out together. This wasn’t by any conscience choice. I just liked being around him because he was such a great guy. He wasn’t just my brother-in-law, he was my friend. And I know that type of relationship does not exist in every family. I am extremely fortunate to have married into a tremendous family and Tim was a big part of that.
I never really thought about the friendship part of the relationship. Tim was just a great brother-in-law. We never argued and I can’t remember having any conflicts with him in the 35 years that I knew him.
The February dinner was great. Everyone had a good time and we laughed boisterously trying to decide what each person should order from the restaurant’s extensive menu. At the end of the meal, I said goodbye to Tim as I had done hundreds of times before. Only this time it wasn’t just goodbye, it turned out it was, GOODBYE. It’s now time not to be so concerned about the inconvenience of rushing to get to places or getting home late.


The Reflection
In December I was able to do two unexpected (and unrequired) acts of generosity for my brother-in-law Tim. At the time I considered them relatively small and insignificant. Upon his untimely passing this Tuesday, I realize that I was able to provide two blessings to him in what turned out to be the last few months of his life. Now these acts to me seem magnanimous, they are almost immeasurable. How is it that my perspective on this was so far off? What “small” acts did I have the chance to do today for other people that I did not do? What opportunities will I have 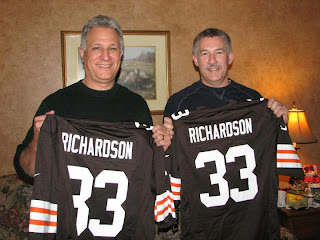