My Diet Plan Is Burning Me Out

Recently I noticed some alarming personal trends.  Several of my shirts no longer fit and I had to buy some new belts.  I wondered why my clothes dryer was suddenly shrinking my shirts and I suspected that a humidity change in the house was shortening my belts.

I guess I could be gaining weight, but I choose to employ the Eric Cartman (from South Park) defense. “I’m not fat, I’m big boned!” I told myself 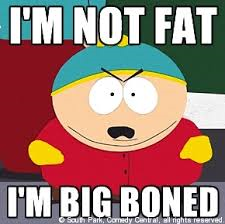 repeatedly until one day after showering, I walked past the mirror.  “Whoa, what is that whale doing in my bedroom?”  I may be “big-boned” but those bones were now supporting a generous amount of fat.   My gut was certainly not displaying “six-pack abs”.  Yes, where the six-pack was supposed to be instead sat an enormous beer barrel.

I live in a culture of personal irresponsibility, so of course this weight gain is not my fault.  I blame it on “Cheez-Its”.  They now make Cheez-Its in 14 different flavors. This means you can eat a different flavor every day for  two entire weeks, which I feel a responsibility to do.  If they are going to make all these different Cheez-Its, then they expect someone to eat all of them and I am committed to pursuing this cause.  Somewhere in the Cheez-It factory is a single-mother, working to support her children, whose job depends on people consuming mass quantities of crackers. Therefore I am truly doing this “for the children”.

So in effect I have been on the Cheez-It diet.  Which meant that every time I thought about eating less and going on a real diet, I would just say “aw Cheez-It” and grab some more crackers.  My only concern is that my favorite Cheez-It flavor is “White Cheddar” and I hope my preference for white crackers does not make me a racist.

But when I was devouring all those Cheez-Its, I never thought about where they were going. And now I have 30 pounds of Cheez-Its stored in my gut.  So a real diet is in order.

The best weight reduction plan I found on the Internet was from Jason Sudekis who said in July that he was losing weight due to having frequent, vigorous, sex with his fiancé Olivia Wilde (really said it).  Now that’s a program I need to jump on.  But when I called to sign up for “The Wilde Sex Diet Plan”, I found out that Olivia is pregnant and after the birth there is a three-year waiting list for getting on the program.

So I decided to try a diet based on “fat burners”.  This seemed liked a perfect plan for me.  It’s much cheaper than Nutrisystem, although if I thought it would make Marie Osmond like me, I would write the check in an instance. But the best thing about using fat burners is that I can sit on my fat ass and the fat burners do all the work.  The fat just burns right off.

Of course on the first day I took double the suggested dosage of the fat burners because I’ve got a lot of fat to burn and I want it gone fast.  But I never even thought about where this “burned” fat would go.

It felt like I had flushed the 30 pounds from my system in one epic battle.  I was very disappointed to get on the scale and see a loss of only three pounds.  And I was also disappointed to find out that my septic system was gaining significant more weight than I was losing.

The money I had saved by not buying the “packaged diet plan” was now being spent getting my septic system sucked.  “That’s one of the worst blockages I’ve ever seen”, exclaimed the septic guy. “And the strange thing is, it was orange!”
Posted by Don Ake at 5:10 PM