We Have The Right To Good Chinese Food (RUU)

A woman who lives near me just made the national news because she called 911 to complain about the poor quality of the Chinese food she received from a restaurant.  She told a dispatcher the food was “not up to par for her liking”.

Many people are laughing at this woman for this action and others are scorning her. But before you judge her too harshly, I have a question for you: Who was she going to call?  She’s staring at a plate of bad Chinese food?  Who can she call?

The food critic at the newspaper? Newspapers are downsizing and that guy was let go ten years ago.  Even if the paper still has one, he is more interested in swirling wine at the new bistro than helping you with bad Chinese food.

Call your mom?  That won’t work.  She will tell you to be quiet and “eat what is put in front of you” also “there are millions of starving Africans who would love to have your meal”.  Now mom might offer to cook you a nice, hot, meal, but not Chinese food.  Moms make terrible Chinese food.  It would probably consist of crappy Chun King stuff and be even worse than the Chinese food you are complaining about.

The BBB is no help.  It was late in the afternoon when the incident happened and these people would probably “file a report” and get back to you in six months.  So who was this poor woman going to call? If not 911, who?  Who I say?

You may claim this was not a crisis situation.  But consider the woman was expecting a great Chinese meal.  She wanted to savor the crispy vegetables, the tangy sauce, the tasty meat, all on bed of fluffy white rice. Instead she is served something “not up to par for her liking”. 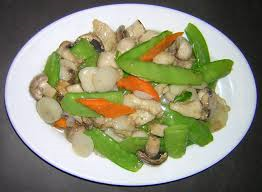 This is a tragedy. Someone facing that type of situation might become violent and might take out their anger against poor, innocent, bystanders. Some of which could be children, elderly, or pregnant – or maybe even all three!  Now did you ever consider this? Well, before casting judgment I think you should.

The police issued the woman some trumped up charge of “misusing 911”.  What I want to know is this: What was the restaurant charged with for serving this lousy Chinese food that I repeat was “NOT UP TO  PAR FOR HER LIKING”?  Maybe if they were held accountable for their actions, next time the moo gai pan might be up to par.

I know you may disagree, but just remember this post the next time you are served Chinese food which is “not up to par for your liking”.  I think we can all agree that we have the right in this country to eat good, good, Chinese food, with eggroll.