I was alarmed by a very disturbing advertisement in my Sunday newspaper.  It said that Mr. Clean multi-purpose cleaner had now been combined with Gain laundry detergent.  This apparently was done to improve the scent of Mr. Clean because there was a “Love at first Sniff” sticker on the bottle.


This is indeed troubling because it raises an important question: Why does Mr. Clean need to smell any better? After all, he’s Mr. Clean isn’t he? If he’s so clean, he should smell fabulous already. So what is the purpose of mixing him with Gain? What is this so called “Mr. Clean” trying to cover up? You may experience “love at first sniff”, but I smell a rat. A dirty rat.


This is even more suspicious in light of the rumored scandals involving Mr. Clean over the years.  First there was the allegation of a dalliance with Mrs. Butterworth.  Mrs. Butterworth was known for being promiscuous and pinning her lovers under her by using her famous “pancake position”.  Very few of the male advertising icons could resist her sweet, sticky, goodness.  After these trysts, many of them were found stuck to the bed, covered in Butterworth’s syrupy goo.


However, even though Mr. Clean was seen entering a hotel with Butterworth, he exited a short time later spotless, even disinfected, with a big smile on his face. Somehow, someway, he was able to wash off all the grime and residue. How he was able to do this and what type of substance he used, is still a mystery.  When asked about it, Mr. Cleaned waffled on his answer.


Then there was the incident with Aunt Jemima. Jemima was also sweet and gooey and this had all the makings of a huge scandal. The rumors gained credence when Mr. Clean appeared with a noticeable black eye, reportedly the result of an altercation with Uncle Ben.  However, advertising agency executives fearing the onslaught of negative publicity, rushed in to concoct a story, explaining that Clean and Ben were fighting over prime advertising spots on Monday Night Football games, and not Aunt Jemima.  Nothing was ever proven otherwise.


Finally, there was the time when Marie Callender allegedly walked in on Mr. Clean and Betty Crocker going at it on the kitchen table.  The location made total sense since both of these icons do their best work in the kitchen.  Crocker said they were just testing the table to see if it was sturdy enough to hold all the side dishes she was going to prepare for a meal that evening.  Clean said Callender was fabricating the story because he had rejected her attention. He said he had no interest in Marie because he found her to be a “cold woman”, even frigid at times.


These alleged scandals were big news when then hit, but they faded away over time.  Mr. Clean was still considered extremely clean.


A few years ago Mr. Clean’s advertising agency attempted to improve his appearance and image by giving him a make-over. He had been a “tough guy” wearing an earring, long before it was fashionable and guys who shave their heads are a bit creepy, no? They softened his image, reportedly to make him more acceptable and pleasing to the modern woman. So they sent him to the spa for an eyebrow trim, facial, exfoliation, waxing, and mani/pedi. Well, la-di-frickin-da!  But maybe the real reason behind this action was to insulate Mr. Clean from these past scandals.


And now they feel Mr. Clean’s natural, manly, scent needs to covered-up by Gain.  What are you hiding Mr. Clean?  What stench are you trying to mask? This is a scandal of epic proportions. Yes, I am saying there is a chance that Mr. Clean is in fact, “dirty”.


I know this possibility seems outrageous. I know that if proven true, it will be painful to accept. However, based what has happened to other advertising figures and celebrities over the past year, we must at least consider that it could be true.  Hey, Hey, Hey, think about this the next time you enjoy some pudding, gelatin, or a made-fresh submarine sandwich.


In light of this obvious attempt to sanitize an already supposedly “Mr. Clean”, I think the Crocker incident should be reexamined.  Around nine months after the kitchen table incident, Betty Crocker gave birth to the Pillsbury Dough Boy. At the time it was naturally thought that Bib – the Michelin Man, was the father.  Bib and Betty were involved in a very public relationship at the time. The Dough Boy, being all white and puffy, does resemble the tire guy. And it was also well known, in one of the most incredible, stupendous, ironies of all time; that Bib preferred not to use rubbers. And of course, nothing says you loved him, like something in the oven.


I think a yeast sample and an appearance on the Maury Povich show is called for to determine who fathered Popin’ Fresh (ironically his name describes what got the sub sandwich guy in trouble).


I demand a complete, thorough, investigation.  But not by Congress, they all need to be soaked naked in Gain for about a month. No, I am calling on the authorities to bring in the most qualified advertising icon for this job, Toucan 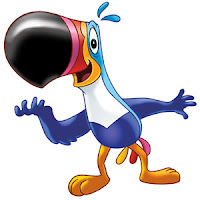 Sam ("Follow my nose! It always knows!") to determine if a cover-up exists. I hope I am wrong about Mr. Clean, but something really smells about this situation, and it isn’t the Gain.