The Sammich Debate Rages On

My book, Just Make Me A Sammich, is not even out yet (release date November 3) and already the title is creating controversy and renewing the debate over the woman/man sandwich making decision. I choose this title because Sammich-making is a running joke throughout my blog and my book is a collection of my favorite blog posts.

I wrote a post earlier this year on this topic which was supposed to end all conflict on the matter.  I said if men would be more polite in their request and women would be more accommodating when their man was hungry (or hangry – anger caused by hunger), then the result would be more sex. Very hot “sammich sex”. That post could even be considered good “sex therapy”. (They call me Dr. Love, they call me Dr. Love).  But now unfortunately, all that good work is gone and the controversy is back.

Recently I made a presentation at a conference for work. I briefly mentioned my book at the end.  Of course the next day no one remembered anything I said in my presentation, they were all talking about “that sammich book”. I sat with a group of customers at lunch. We were supposed to be talking about very important factors in the trucking industry, but of course as soon as I arrived, the topic turned to sammiches.

One woman at the table chimed in, “I believe a husband should treat his wife so well, that he should not even have to ask her for a sandwich. She should want to make him sandwiches.” This confirms my contention that this sammich-making stuff is very important to women.

The guys at the table quickly became mute and looked to me for a response.  I had none. I politely nodded in agreement because this woman is totally correct, men should treat their wives better. But unfortunately, guys are not going to do that because it takes time, effort and skill. And let’s face it, that’s just too much work. Men are just too lazy, and besides, an effort like that takes time away from more important things such as watching football and playing golf.  Of course we got the skills, we just choose not to use them.

But the sammich-making stuff is important to guys also.  I was at a party and Steve was bragging about his new, smokin’ hot girlfriend, who would be arriving soon.  When she got there, I was confused because she looked like a “plain-Jane” to me.  I pulled aside Steve’s friend Tony and asked for an explanation.

“What? I heard of baby-makers, but a sammich-maker?”, I asked.

“Oh yeah, she works at Subway and the woman is an expert sandwich maker.

She knows how to use “all the toppings” if you get my drift”, he said.

Then I get home and turn on the television and I see Dr. Phil saying:

“On today’s show, we try to help this couple deal with a disagreement over the sammich-making responsibilities in their marriage.  Paul manages a real estate office. When he comes home at night, he’s hungry and wants his wife to make him a sammich, but his wife Sabrina, a real estate agent in that office, says she’s the one that works hard to sell the houses, and Paul can make his own d@#n sammich.”

Paul: She’s my wife. It’s her duty to make the sammiches!

Sabrina: You sit on your fat a$$ all day, while I do all the work. You should be able to at least make your own sandwich.

Dr. Phil: Sabrina, what are you usually doing when Paul gets home and wants his food?

Dr. Phil: Oh $h!+!  Ladies! Ladies! Stop the fighting! Put the chairs down now! You are not on Jerry Springer!  Don Ake you are an idiot, you stupid sunavabitch. Look at what you have started.

I think I need to reiterate that sammich-making is a personal decision that couples need to decide on and what happens between the sheets, the sheets of bread of course, should remain private and not be discussed publicly. Of course I know men and women will discuss the intimate details with their closest friends.

Jack: Carol made me a sammich last night that was mind-blowingly good.
Man, it was so awesome and she used only natural, organic, ingredients.  And get this, we didn’t use any condiments!

Bill: No condiments! Are you kidding me? Nothing between the meat and …...

Jack: Oh yeah, it was a totally organic experience.

And then on the other side…...

Sue: I made Rick a sandwich on Tuesday.  He was extremely hangry, so I tried to help him out.

Becky: You actually made his sandwich for him? Do you think it was worth it? How do you feel about all this?

Sue: Yes, I ended up with mayonnaise all over my face, but it was worth it to me to please Rick in that manner.

Becky: Ewww, I hate the taste of that stuff.

Ironically I was inadvertently drawn into the controversy because I literally had to ask my wife to make me a sammich to be used in the photo shoot for the cover of my book.  She did this for artistic reasons and did a fantastic job (see photo).  The Sammich became the star of the photo shoot instead of me, which of course made me very jealous.

So again, the book is not about sammiches.  It’s about the absurdities in relationships, life, work, celebrities, sports, and other things that I find amusing. It will be here in just two weeks! 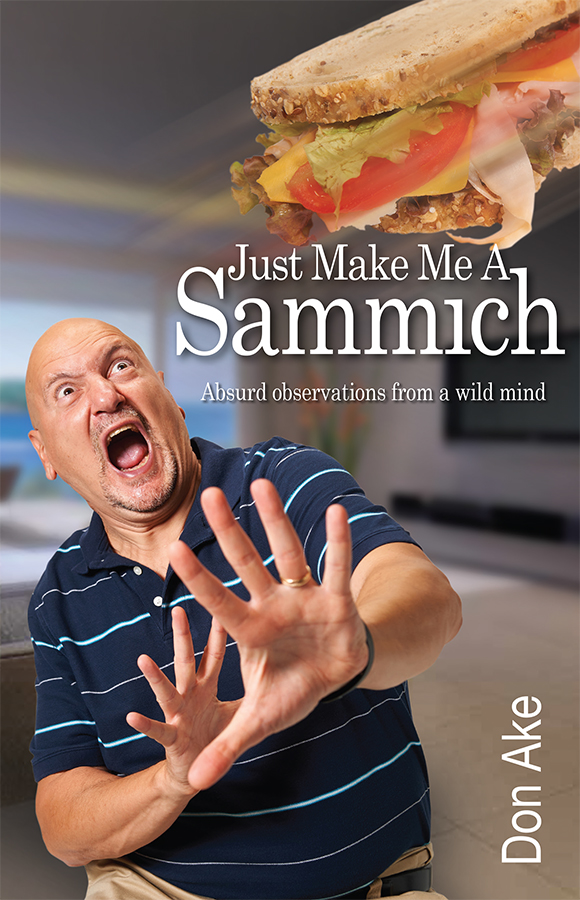 Buy the book now: Just Make Me A Sammich