Gather round, children. Your Uncle Don has another heartwarming Christmas story for you this year.  This particular story is about Tim, but not Tiny Tim. This Tim could be tinier, but he always eats too much at the Chinese buffet.

It was a cold Friday in December, when Uncle Don’s coworker Tim, arrived at work and proclaimed it was going to be an awesome day.  Uncle Don and Erin (the guy with the huge beard from a previous post), who also shared that office, listened intently as Tim explained.

You see last Christmas, Tim’s newlywed wife went out and bought way too much stuff at Christmastime. She done rung up so many expenses on their credit card, they were still paying it off in June!

Now in the olden days’ children, we probably would have never heard anything about this again, but now we live in the digital age, children, and in the era of too much information.

So a little bit past 10 a.m., the productivity and the peacefulness of the work environment was shattered …

“Why did she buy that stuff at Macy’s? She was supposed to go to Target! The stuff is way cheaper at Target!”, exclaimed Tim.

I looked over to see Tim clutching his smartphone in both hands, grabbing it so tightly his forearms bulged.  His jaw was clenched, his wide eyes staring at the screen in disbelief. That’s right children, Tim had decided to track his wife’s purchases in real time on the Internet.  Smart guy, that Tim.

“She probably went to Macy’s because that’s where her mother likes to shop”, Tim speculated.

“Yes”, said Tim.  “She likes to go Christmas shopping with her mother.”

Erin and I then exchanged raised eyebrow, worried, looks.  We knew Tim had a problem. Them women was shopping in packs and nothing good ever comes of that, children.

Now a guy would look at the very same situation and realize that if you even have to ask the question, then the answer is “No, we can’t afford it.”  Of course men also make poor decisions when roaming in packs.  Many a call from the police station has started off with: “Honey, the guys though it would be a good idea to stop at the strip club on the way back …..

About an hour later, Erin and I were once again startled by …..

“She really overspent at that store! What did she buy that would cost that much?!  WHAT?”, screamed Tim

“Maybe she bought your gift there.  You wouldn’t want to question that, would you Tim?  You would look like such a jerk”, said Erin.

“Well, you might be right, but she is spending too much”, said Tim as he walked out of the office.

Of course as soon as he was gone, Erin and I broke out in hearty laughter over this situation.  Now I know this constitutes laughing behind your friend’s back, which isn’t very nice at Christmas time.  However, the alternative would be to laugh in his face. And of course this laughing was Erin’s fault since your Uncle Don is a rather serious sort, who rarely laughs at anything.

But then sometime around 12:30, there was some very encouraging news …
“Hey they’ve finished shopping and stopped for lunch on their way home and she’s under budget!”, proclaimed Tim enthusiastically.  “But they did spend a lot on lunch, though.”

“It does if she puts it on the credit card”, said Tim sternly.

“Wait a minute! They’re not at the Appleby’s near her mom’s house. They’re at the one on Monroe!”, said Tim.

“Isn’t that the one right by that new mega strip mall”, asked Erin?

Oh no!, silence and dread then filled the office, children. Them women folk were not retiring, they were reloading.

We then went out for lunch and fortunately Tim didn’t check his credit statement at the restaurant, allowing us to enjoy the meal, eating in peace and tranquility. We returned to office and started back to work vigorously, as we always did on a Friday afternoon.

But that highly productive work environment was regrettably disrupted again …..

It was exactly 1:52 p.m. (I honestly did check my watch), when poor Tim literally threw his head down on his desk and pounded his fists.

Erin and I exchanged a look of despair.  We were morose, children; morose I tell you.  There is no laughter when a man is defeated so decisively by his woman. Only gloom and misery.  Of course there was no consoling either, because guys just don’t do that.  This is one of those instances that is so shameful, so devastating, it should remain a strict secret forever.  It should never be spoken of again and under no circumstances should it be blogged about and posted on the world wide web. Only the most despicable cad would ever do that.

Tim may have thought this was over, but unfortunately Tim’s wife surely didn’t consider it finished.  Heck, it was only two o’clock, plenty of time for more shopping, and the temptation of that new, big, strip mall was too much to resist.  She made at least two more significant purchases, because work was interrupted two more times that afternoon by loud, mournful, painful, sighs.

Each time I looked over to see Tim glaring into that smartphone, shaking his head. The final time, I think I may have heard Tim’s credit card let out a painful yelp from his back pocket. It was either that or the burrito he had for lunch.

So children, Tim’s attempt at restraining his wife’s Christmas spending failed miserably.  His Christmas budget lay dead under his Christmas tree.  But Christmas is not about ol’ stupid budgets, children.  It’s about spending enormous amounts of money, on stuff nobody needs, because all the 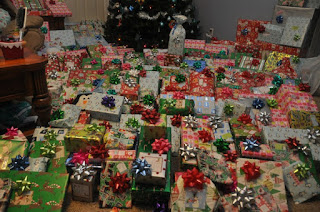 commercials and advertisements tell us we have to.  And it’s about overcoming obstacles to reach our full potential and test our limits, our credit limits, that is.  It is about love, children, our exorbitant love of shopping.