First there was the Horse Whisperer who calmed wild horses, then there was the Dog Whisperer who trained and brought obedience in unruly mutts, and now AKE TV introduces the fabulous new reality show, The Car Whisperer, who turns dangerous drivers into model motorists!  Welcome to episode #1!


Announcer: Meet Melvin Snerdly. Mr. Snerdly is considered the top driving instructor in the U.S.  He has taught thousands of students how to drive over his 30 years in the business.  He has taken the written driving test in all 50 states without missing a single question.  He is easily recognized by his classic pocket protector and bow tie.


Today’s problem driver in Carl “Crash” Craminski. Carl currently holds the record for license violation points in three different states.  He is not very well liked by insurance companies.  Flo from Progressive once tried to kick him in the nads. The Geico gecko has flipped him off and Jake from State Farm refuses to take his calls. 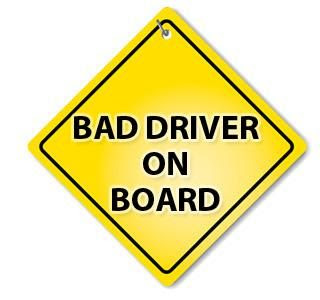 As our subject drives around the city, Melvin, The Car Whisperer, sits in the back seat, leans forward, and gently whispers words of instruction and encouragement.  The goal is to turn, our reckless driver into a model citizen of the road.


Melvin (in very hushed tone): Yes Carl, check to make sure it’s clear, then slowly back out.


Okay you just missed that car coming behind you.  But that’s okay, now pull out onto the street, making sure you give enough space to the cars approachi….


You also might want to turn down your stereo. Just because you enjoy crappy music, it doesn’t mean everyone does.  And unless you are deaf, you surely must be able to hear it at reasonable volumes.


Now you are going to be turning right up here, so you should be getting into the right lane and signaling the turn.  Get over, get over, get ….


Okay, the turn signal was invented in the 1930’s and has been standard equipment on cars since the 1940’s.  And it’s very easy to operate, down for left, up for right.  See, you can do it.


Ah, now you can make a right turn on red.  It’s clear, you can go. Go ahead. Still clear, what are you waiting for? ….  Okay, now you can’t go because the left turn signal on the other side is on and if you turn now, cars will be coming right at you, so don’t go noooooooooooow……….


Now you have the left turn arrow.  That arrow pointing to the left means you can go left!  So go, don’t just sit there and stare at it ,go, go, [Massive horn honkings] Now the arrows off, don’t turn now! Don’t turn noooooooooow


Oh here we are approaching an eight-lane, four-way, stop.  This is one of the most challenging driving situations around. Just slowly pull up to the intersection and stop and I will talk you through – uhhhhhh


You see, a rolling stop is not actually a stop, because you never actually stop, get it?  The stop sign is there to tell you to stop and all those silly people honking their horns actually expected you to actually stop.


Alright, you don’t to brake when approaching a green light, that’s just not needed. You will have plenty of time to stop in the light changes.  That’s what the yellow (caution) light is for.  It’s been around since 1920, so you should have had sufficient time to adapt to it.


Now please stop talking on the cell phone. You are weaving are over the road. Okay now you are going straight, straight down the middle, over the yellow line.  (massive honking). Um you really shouldn’t give the finger to other drivers when you are the problem, it makes you look like a jerky numskull.


Uh you are not providing an assured clear distance. Why are you so close to the next car? Why, why, he can’t go any faster than the cars in front of him, can he. You need to back off, in case he brakes without waaaaaaaaaaaaa


Now it’s time to get on the expressway and master some highway driving.  Increase your speed on the on-ramp, signal, and look for a nice gap to merge safely into traffic.  Look, there’s a swell space open behind the Buick, no behind, not in front, behind, behiiiiiiiiiiind


Now you are in the far left lane, the speed lane, or passing lane. When you are in this lane you need to maintain a faster pace so as not to impede other drivers who want to go faster. So you are now five miles per hour under the speed limit.  So speed up, speed up, push the accelerator. Push it, push it. [honking]


Look in the rear view mirror.  See the traffic backed up 10 deep behind you?  They want to go by you, but they can’t because you are hogging the lane.  Look, look. The rear view mirror was invented in 1906 and every car has one.  Either speed up or get out of the speed lane …


Just look for an open space to the right, use your turn signal to indicate you are changing lanes. Whatever you do just don’t jerk the wheel to the right and oooooooooooo (honking)


Ah now you do need to pick a lane and stay in it.  This one’s good, okay this one.  How bout this one. Really shouldn’t pass on the right.  Pick a lane….. please pick a lane, any lane just pick one.


Okay you in that car’s “blind spot”.  It’s called the blind spot because the driver is unable to see you in his mirrors.  You need to speed up or slow down before that other car decides to change lanes ……………


All right, you are back in the speed lane and this time you are keeping pace with the traffic.  Good boy, Carl.  Ah but see that sign?  Your exit is coming up and you need to start moving over to the right lane.  Now, start moving now.


You see your taxes paid for that sign and workers put it up so you would know to get over,  so you would not need to quickly cut across traffic to exit.  And look!, they put up a second sign again letting you know the exit is coming up, just in case you missed the first one.  So get over, change lanes, change lanes now


Well it’s too late now, you can’t make it with that big semi in the right lane, you will just have to get off at the next ex……….


Melvin (in normal voice): Let’s find a restroom, I need to change my shorts.  Turn left up ahead.


(Back in whisper-mode) Now made a square turn, don’t just sweep across the lane because a car can pull up and


[after a quick bathroom break]


All right, you are not going to be able to make a left turn out of the parking lot. You cannot go across six lanes of traffic in rush hour.  You can’t even do that on Frogger, ha ha. So just make a riiiiiight


Announcer: That concludes the premier episode of the Car Whisperer. Unfortunately, there will not be an episode number 2.