It was the mid-90’s when I received a letter from my mutual fund company informing me that I could access information about my account “on-line” through something called a “website”.  I had no idea why I would ever want to look at account information on my computer, but this concept sounded intriguing.


So I dialed up on AOL (if you are under 30, ask someone what this means) and proceeded to set up an “account”.  Then at some point I was asked to create a “password”, a four-digit code, that would allow me, and only me, to access my information.  I came up with four numbers I could remember and typed it in. Then suddenly, almost magically, I felt very sophisticated, debonair, and mysterious. James Bond has a password, underworld spies have passwords, and now I have one too!


That afternoon I noticed an attractive blond at the drug store and thought (in a Austin Power-ish voice):


Hey baby, I have a password. I am now a very sly, international man of mystery.  If you try to seduce me, I’m sure you can force me to reveal it.  Then you will know how many shares I have in my International Bond Fund. Come on baby, try to get it, please, please try. 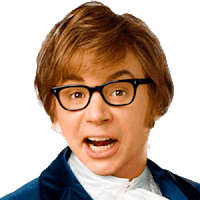 So I had one password and I could remember it --- and so it began ……  Soon I was paying bills on-line, each account requiring a password.  Then banking and other financial accounts, still more passwords.  The beginning of the new millennium brought on-line shopping, each vendor wanting me to set up a new account, with of course, my own personal password.


And then things got even worse. More time spent on-line accessing news sites, organization sites and social media sites, all requiring accounts --- and passwords. I now even need a password to order a pizza.


I estimate I have over 200 online accounts that require a password.  But this is not a problem since I use the exact same password for all of them!  Ha, that’s a joke, but you already knew that, since keeping track of all your passwords is freaking impossible.
Because the invention of online accounts began the epic battle between the Bad Bastards and the Good Bastards.  The Bad Bastards are the computer hackers who want to find out your passwords and commit theft and fraud and the Good Bastards are the IT people who try to prevent this from happening.  Yes, they are “good” because they are trying to protect you, but they are still bastards because of how they go about doing it.


Initially passwords were 4 numbers, leading millions of idiots to create the password “1111”, which the hackers nicknamed “ba-ching”.  Then the Good Bastards countered by requiring alpha based passwords.  Then the millions of idiots started using “password” as their password. “Yuk, yuk, my password is “password”. Get it? Pretty funny, hee, haw”, to which the hackers said “bada bing ba-ching!”


Too vulnerable, so some sites went to …


Six-digit password requiring at least one letter or number = cobra1


Six-digit password requiring the previous, but one capital letter = Cobra1


Still not secure enough so ….


Seven-digit password requiring at least one letter or number = cobra88


And so one …. until you get to the ultimate:


Eight-digit password requiring a capital letter, a symbol, no letters that form words and no repeated numbers = Oh, the hell with it, you lousy bastards, you!


(I do declare that if I ever meet the bastard who is responsible for this rule, I will kick him square in the nuts, and then laugh hysterically)


Throw in the recommendations that you should not use the same password for all your sensitive accounts and that you should change your passwords frequently (although I doubt if anyone really does it) and you end up with a whole slew of passwords, many that differ my only one letter, number, or symbol.


Then comes that special moment when you are asked for a password for a site you haven’t been on in months. You have no idea if this site requires six, seven or eight digits, caps, no caps, etc. You have no clue which of the 20 or so passwords you now have will work on this site.  I believe the Good Bastards get a chuckle out of this.


And then just to make the game more puzzling we add in the following challenges:


-         Enter the wrong password three times and we lock you out.  This is very easy to do based on my examples above and can be very frustrating when the information you need is critical. It can cause you to scream vile things at your computer you wouldn’t say to any person.


So a solution is to log all your passwords in a spreadsheet, which is very dangerous if it’s ever compromised. Of course you could protect the spreadsheet by using a pass…. oh $h!+, forget that.  You can also pay $30 a year to bastards to manage the password mess created by other bastards. No, thank you.


Now if you work in an office, there are even more computer passwords.  The IT bastards are even stricter there, because they can lose their jobs if the system gets hacked.  At one former job, I had to enter three different passwords every morning (and change them frequently) to access the system. I often wondered if security at the CIA was this tight.


If you want to fizz off the bastards in your IT department, and I know you do, write down your password (not your real password, but something close which helps you remember it) and post it prominently by your computer. Trust me, this really causes their heads to explode!


But here’s my idea to make passwords more tolerable. Use the name of your worst boss ever and create the password “Tedsucks99!”  It is a “strong” password, it is a true statement, and you will smile every time you type it!