2018: The Most Incompetent Year Ever

When the ball dropped for 2018, I had been collapsed in bed for hours after suffering excruciating body aches and high fever from my worst day with that horrible flu. And then the year got worse. Yes, really. A work email with some distressing news a couple days later. My dog dying, a couple weeks later. And several unexpected problems finalizing my book, which delayed its release for a couple of months.

And then the weird stuff started happening. Just one strange thing after another. Nothing seemed to go right, or smooth, the first time. It wasn’t so much Murphy’s Law as it was Murphy’s Year. I’m calling it the Year of Incompetence, yes incompetence, not incontinence, but I’m sure that year is on the horizon, and I don’t expect to blog about it … much.

But I encountered many incompetent people this year. Of course, I, had another supremely competent year, hardly making any mistakes at all. But those other people! It’s a good thing I don’t celebrate Festivus, because it would take me all the way until 2019 to air all the grievances I had with idiots this year. And for feats of strength, I might see how hard I could kick some people in the @ss.

I had a confrontation with a woman on a flight after she slid her seat back into my knees. She was furious that she couldn’t move her seat back. But at 6’3” there was no space for me to give. I wondered why she needed the extra room anyway. Well, as she deplaned, I could plainly see that she was very pregnant. Of course, her degree of largeness at that time made me feel very small. I had upset a woman with child.

This was a heck of a way to start off my summer vacation and it bothered me for several hours. And then I realized that regardless of her condition, she had been rude, and I had really done nothing wrong. Hey, you are young and fat (temporarily) and I’m old and fat (permanently), so respect your elders, beeatch!  You are the Incompetent Traveler for 2018. Honorable mention to the two millennial dudes who think if you get to the row before me, you get to choose your seat. Nice try, but I read my ticket, and this ain’t Southwest: So git your @ss out of my seat!

But speaking of confrontations ….

Almost A Brawl At The Ball Park

My wife and I were enjoying a lovely night at a minor league baseball game, with seats in her company’s loge. We ventured down to get some ice cream and sat down at a table to enjoy it, when my wife was hit in the back by a plastic cup thrown at least six feet by a child at the table next to us. (It was not the first thing the kid had thrown, but the first directed at us). It really wasn’t a big deal and the father apologized, but then unexpectedly he began to publicly and loudly berate us. This was odd, because at that point, neither my wife or I had said a word to him.

(Shouldn’t he have been yelling at his kid instead of us?)

My wife responded back and now we had a situation. Now unless someone’s life was in danger, my fighting days are over. However, he was terribly obnoxious and was disrespecting my wife, so I did walk over and tell him to stop. Which he did, until I walked away, and then he started back up more intently. At that point I had to decide if I was going to rumble or not. I figure the guy was in his early 30’s, but I still might have been able to take him. I decided to return to the loge and enjoy the rest of the game. (No need for my wife to explain to her boss why her husband got arrested at the baseball game)

I don’t think the guy was drunk. I think he became deranged because we had implied that his son had done something wrong, uh, which he had. Well, you can parent as if your kid can do no wrong, but you might have just a small problem when your son hits the teen years, just sayin’. Yes, you are the Incompetent Parent of 2018.

Now the reaction to my choice, posted on Facebook and told to others, surprised me. Guys who are younger than me, thought I should have punched the guy (and if I was younger, I probably would have). Guys my age, agreed with my response. However, women of all ages thought that I should have fought the guy, even though he was much younger than me. So, no matter how liberated our society is becoming, chicks still like to see guys fight, no matter how old and fat they may be!

I’ve Got A Secret 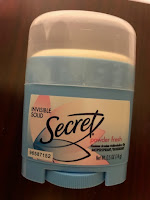 I forgot to pack my deodorant on a business trip. When I asked the hotel clerk for an amenity, he returned from the supply closet with a sheepish look on his face. “Sorry, this is all we have”, as he handed me a container of Secret anti-perspirant. Oh well, “Secret - Strong enough for a man, but made for a woman”. I do want to say that this stuff could not control all my manly sweat, but it did effectively cover my man-smell with a sweet, flowery scent. I did put on extra cologne, an extremely manly cologne I might add, so the guys at my business meeting wouldn’t think I went all Caitlyn Jenner on them. The good news is the Secret did help me get in touch with my feminine side that week. And when I took off my shirt each night, I couldn’t help thinking: “Man, I smell like a woman”.  This was the Most Incompetent Hotel of 2018.