A Very Intimate Handshake – 2018 A Most Incompetent Year (Part 2)

My 2018 was filled with incompetent idiots, as I shared in Part 1. Here are some more people who made the year so special.


Strangely enough there were two incompetent events involving the sum of $50 …..


I wanted to have a March book signing event at a relatively new restaurant in the area. The place has a nice meeting room in the front and a smaller, shabby, meeting room in the back. I met with a representative who told me the front meeting room was available the night I wanted it and there would be no charge. “Great”, I said. “Let’s book it”. She then asked for my credit card number for the $50 reservation fee.  She explained the $50 guaranteed I would get the room. If I didn’t pay this, someone else might pay the $50 and get the room.  Oh, and the fee is non-refundable. So the room is free, but the reservation costs $50? I told her I would have to think about it.


I considered my options and called back a couple days later. I said I wanted to reserve the meeting room in the back, but I wasn’t going to pay the reservation fee because I was sure no one would reserve that shabby room on a week night in March especially if the nice room was available.  The conversation then progressed smoothly again, until she asked me for my credit card number, again.  I protested and argued, but she refused to let me book the “free room” without paying a $50 fee.


Well, they didn’t get their $50. They also didn’t get the $300 spent that night at the book signing. Nor, the $1,600 that my authors group spent this year at a restaurant just down the street from them. Throw in my personal spending that I diverted, and they fizzed away around $2,000 trying to finagle $50. Oh, and the book signing made the front page of the community newspaper, so “No, PR for you”! This place, which I will not name, is the Most Incompetent 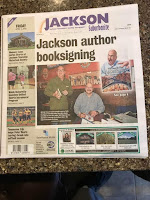 Restaurant of 2018.  A special thank you to the Winking Lizard in Canton for hosting my successful event!


I spent time and some money for over a year to help out a friend of nine years on a difficult project she needed to complete.  And then in the end, she just totally sold me out for a meager $50. Pulled the rug right out from under me. Didn’t ask permission, but didn’t ask for forgiveness either. I didn’t get angry, I was just stunned that our friendship was not even worth $50 to her. Well, if the friendship isn’t worth $50 to you, then it ain’t worth nothing to me. So, buh-bye. You are (was) the Most Incompetent Friend of 2018.


Honorable mention to the friend who tried to blatantly undermine my authority on a big project (author related) that I was leading. And also, to the friend who got annoyed and trolled me every time I posted something about my book on LinkedIn (as if my book is not a business?)  With friends like these ….


I encountered the movement of hyper-sensitive interaction between the sexes. Now I know you are thinking that I slapped a woman on the butt, after my post about the hippo in September, but you are wrong! And you should be ashamed for even considering that. No, I didn’t do or say anything inappropriate. I merely complimented the appearance of a long-term acquaintance at a business social event (not work related).


In the past, this woman had sometimes worn the equivalent of her grandma’s sweaters to these meetings, but this time she showed up in a finely-tailored business suit. She looked stunning and I told her so. She accepted the compliment in the moment, but unfortunately this led to a very awkward phone conversation the following morning, because I had “made her feel uncomfortable”.  But shouldn’t she have felt great because she wore a killer outfit and people noticed? (I know some readers will disagree with me on this assessment, and that’s okay. It doesn’t make me a bad person and you should not get angry about this. It just means we disagree on this subject and we both need to learn something from it.)


She wanted an apology and I was searching for the appropriate response, when my business phone rang and I abruptly ended the conversation. She was still upset, and immediately called back and left an angry message on my HOME voice mail. Well, if you think I crossed a line dear, you went way over the line with that one. You are the Most Incompetent Acquaintance of 2018. (But you still looked good ….)


Shake It Up Baby


I met a woman at a book event who is a public figure. We were standing at a normal distance from each other when we shook hands. But this was no normal handshake. She grasped my hand firmly and then pulled it back all the way to against her body. I had to take a full step forward. And to make it extra weird, there was actual “boob-contact”. Now you women out that might be thinking “are you sure?”, but the guys understand that we are fully aware when we get that special feeling. That was the Most Incompetent Handshake of 2018. (And the weirdest handshake I have ever experienced) And no, I did not call her the next day because she made me feel uncomfortable.


On three occasions, telemarketers spoofed my cell phone number to make it appear I was calling people to sell them $#!t. This resulted in angry texts and calls back to my cell phone. If I ever catch the people who are doing this spoofing, I am going to kick them square in the nuts. So this better not happen again in 2019. You are the Most Incompetent Marketer of 2018.


And to everyone out there who ignored my emails and failed to return my calls – I’M STILL WAITING!!!! YOU STUPID, INCOMPENTENT, SONS OF BISCUITS!


So people, lets step up your game in 2019. Just give me some competence, that’s all I ask.