He Wouldn’t Throw In The Towel

I had initially planned to launch my third humor book, “Turkey Terror At My Door!” at the end of last March. I had just started to schedule book signings and events when the lockdown hit in Ohio on March 13th, Friday the 13th, by the way.

I consulted with my publisher and decided to delay the release, but there wasn’t a clear consensus.

Me: We need to delay the book release.

Publisher: Why would we do that?

Me: Haven’t you heard about this coronavirus?

Publisher: That cold germ? Are you letting that stop you? What are you, a pussy?

Me: I want to release the book on June 3rd

Publisher: Are you insane? Haven’t you heard about this coronavirus?

Me: Yes, but if we wait until the pandemic ends, we could be waiting a long time.

Publisher: Fine, but what are you, an idiot?

The decision to release the book was the right call. Sales were decent, considering the circumstances and the lack of in-person events. As the the pandemic eased some in August, I held a couple “open-air”, in-person book-signings. I scheduled several events held outside in September since I would not be able to have any events outdoors the rest of the year.

However, if the September events went well, I would need more books. This was a great accomplishment under the circumstances, and I was reordering much sooner than I had for my previous books.  So, of course, I called my publisher.

Me: I need to order more books.

Publisher: What did you do with the books we sent you?

Publisher: How did you do that?  Haven’t you heard about that virus?

Publisher: Well then, I recommend you order more books.

Me: Good idea, send me another box, please.

I was away on a short vacation to a safe, remote location when I got the delivery notice that the books had arrived. I was concerned because my  daughter would have to move the heavy box off the porch. When I got home, I was surprised to see the box on the kitchen counter. When I asked my daughter how she had managed to lift the box that high, she laughed it off and said she had been working extra hard at the gym. This was the first indication that something was amiss.

The box sat on the counter for a couple of days, as I got caught up from being away. But then I accidentally bumped the box, and surprisingly, it moved. I grabbed the box with both hands but it was lighter than expected, much lighter. Very, very, light.

I ripped the box open, only to find it did not contain any books, but two packages of white bath towels. I just stared at the towels in disbelief. I quickly checked the shipment notice, which confirmed that one box of books had been delivered to my house on Wednesday.

I was unsure of what to do next. If I call the shipping company, they would ask me to return the towels. I did not want to do that because my possession of the towels is the only proof that I had not received my books and that the shipping confirmation notice was also incorrect. So, I call my publisher. 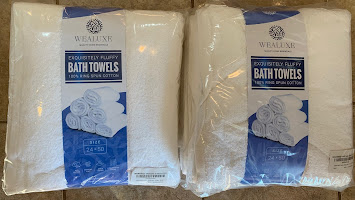 Me: I didn’t get the books. They sent me towels.

Publisher: I thought you ordered books. How you gonna sell more books, if you got towels? Can you sell the towels?

While I was waiting for an answer, I examined these towels in greater detail. These were not just any towels. They were EXQUISITELY FLUFFY, made of 100% RING SPUN COTTON. And I just hate it when my towels are only 85% ring spun. The towels feature supreme loft, are quick-drying, and have long-lasting fibers. Everything you would want in a bath towel. They were made in Pakistan, and you know how luxurious Pakistani cotton products are.

Oh, these were tremendous towels. I could imagine stepping out of a hot shower and wrapping myself in one of these babies. It might feel better than the shower itself.

My publisher soon called back. The shipper had assumed liability for the mistake, and the books would be reprinted and reshipped. This was fine because one of my book events got cancelled and another one wasn’t well attended. I still needed the books, but there was no rush. And more importantly, there was no mention of returning the towels. The towels, all 12 of them, were mine! All mine! Woo Woo – score!

Upon hearing that the problem had been resolved, my wife walked over to the box of towels which had been sitting in the living room for over a week. Why she waited so long to get involved is a mystery. She then carefully pulled back the shipping label. Underneath was the package label, which revealed the towels were supposed to be sent to a hotel. And this is key, a hotel less than four miles from my house.

Now, prior to this knowledge, I had no problem keeping the towels. Someone had made a mistake that had inconvenienced me, and it would be a hassle to send them back. However, now that I knew who the towels belonged to and could quickly rectify the situation, I couldn’t in good conscience keep the towels.

I called the manager of the hotel and explained the situation. We both had a good laugh about it, and I explained he could send someone over to get the towels when convenient. We were wrapping up the conversation, when:

Manager: By the way, what were you supposed to get in your delivery?

Manager: Books with a turkey on the cover?

Manager: Yes, I’ve got your box of books in my office.

Twenty minutes later, I am driving over to the hotel to make a much-welcomed trade. However, I was still upset about giving up those luxurious towels. But then, I had a great idea.

When I met the manager, I offered to trade him one of my books for one of his towels. A more than fair offer, no? But sadly, he turned me down. You see, the pandemic had caused a severe towel shortage, and he needed every one of those towels. No, he could not spare a square. I was crushed.

I called my publisher and cancelled the new book order since it was no longer needed. Everybody, the shipper, publisher, hotel manager, and hotel guests were happy, happy, and happy that the problem came to a surprisingly satisfactory resolution. Everybody was happy except for one person. I didn’t get one darn towel out of whole bizarre episode. Now it haunts me whenever I shower.