Reece’s Pieces (Breaking Up Is Hard To Do)

Think of all that we've been through

And breaking up is hard to do

They say that breaking up is hard to do*

Relationships are difficult to keep going. You’ve got the guy, and the gal,and all these differences and expectations. It’s no wonder that most couplings don’t last. In this world of online dating, the forming of relationships speeds up, and the breakups are usually quick and relatively painless. But the longer the relationship goes, the harder the breakup, and unfortunately, some of these are “bad breakups,” which can hurt deeply for an extended time.

Naturally, most of these bad breakups are the guy’s fault. I know this from extensive scientific research studies. When asked who’s responsible for bad breakups, 100% of female respondents said “the guy”. When guys are asked that question, most respond, “Uh, don’t know. Really don’t want to talk about it”. Which I will point out is NOT an admonish of guilt. But these answers explain a lot about why relationships don’t work.

So, based on that scientific research, I will concede that it’s the guy's fault in most cases. It might be because he is not attentive, too rude, unkind, watches too much sports, drinks too much beer, is not romantic enough, doesn’t listen often, etc. While women expect all these things, to be fair, it just seems like an awful lot of work, especially if the Lakers game is on. Guys also have certain urges and sometimes allow their wiener dog to run loose and not be confined to his own pen. This is a major cause of bad breakups.

But men should be more concerned about the consequences of bad breakups. Even though you may consider them the fairer, weaker sex. A woman scorned, by let’s say a “bad breakup”, is capable of some extraordinary bad behavior.

This brings us to a disturbingly true story of a young Wisconsin couple, we’ll call them Reece and Jackie, and probably the worst bad breakup of all time. We’ll just assume that Reece was at fault here. I’m not sure what he did, but trust me, it wasn’t good.

Because Jackie was broken to pieces emotionally, they found Reese in pieces literally. His upper torso was found in a storage tote. A box in Jackie’s van contained other body parts, including legs. And Reese’s head was found first, at the scene of the crime, in a bucket. That’s right, he not only kicked the bucket, but he also filled it up. Jackie started to get hacky, and the result was Reese’s pieces.

When the police asked Jackie what happened, she replied, “That is a good question.” A better question is how Jackie dismembered the body using just a bread knife with a serrated blade. But then again, women are supposed to be skilled in using kitchen utensils. 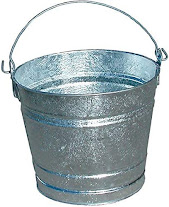 Jackie could have gotten away with this hack job, but she forgot to take the head with her. “I can’t believe I left the head”, she lamented. Love is a matter of the head and the heart, so if you happen to cut up both, you should always keep them together. And one significant contributing factor, Jackie is a meth-head and had smoked some strong methamphetamine before breaking up with Reece and then breaking him up.

Guys, we can all learn something from Reece. That would be nice, because then he wouldn’t have died in vain and had all his pieces-parts and organs strewn around Wisconsin. The lesson here is to be much kinder, gentler, and more civil to your woman. Because if you really fizz her off and she is as skilled with a serrated bread knife as Jackie, you may truly find out that breaking up is hard to do. Also, if you happen to be an organ donor, it will take a search party, including some hounds, for your donation to be collected.

Also, based on this story, you might want to avoid women who are meth-heads for dating partners. It seems that meth-fueled rage is a little over the top, and you could find, we’ll they could find, your head in a bucket. Now I know you think you can spot a meth-head by her appearance, but you cannot. The mug shot of Jackie is quite attractive. Wayne and Garth might describe her as “babelicious”.

So guys, good luck with those relationships! Remember, kinder, gentler, more respectful, more attentive, etc. And maybe keep the bread knives, and buckets, for that matter, out of sight.

Don't put your knife inside my jaw

Don't you leave my heart in Waukesha

If I’m dead then I'll be blue

'Cause breaking up is hard to do*